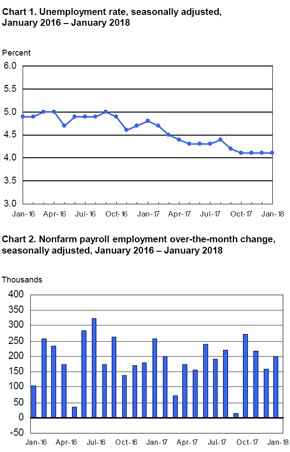 With the first month of a new year in the books, the Bureau of Labor Statistics released its first Employment Situation Summary of 2018, and found that the pattern of fairly robust job growth and low unemployment seen in the booming economy of last year continued.

Nonfarm payroll businesses across all sectors added 200,000 jobs in January 2018, a significant uptick from the approximately 160,000 new positions created in December 2017 (revised upward from the BLS’s initial tally of 148,000 jobs). Unemployment remained static at its record low of 4.1 percent for the fourth month in a row. Leading economic experts surveyed by Bloomberg had expected a slightly more modest median figure of 180,000 new positions during the month.

Average hourly earnings across the nonfarm private sector increased 9 cents, a minor downturn from the previous month’s 11-cent gain, but year-over-year wage growth from January 2017 to 2018 is a strong 2.9 percent. Also, in the last three months of 2017, wages and salaries shot up 2.8 percent. Minimum-wage increase laws coming into effect in more than a dozen states should serve to further boost workers’ earnings.

“The gain in wages will add to concerns that inflationary pressures are building in the economy,” Feroli told Bloomberg. “It solidifies expectations that the [Federal Reserve] will hike [interest rates] in March. The question is, what will they signal for hikes after that?”

The answer to Feroli’s query remains to be seen, as no signals have emerged to indicate federal benchmark interest rates being raised beyond the widely predicted March 2018 hike. That said, this small uncertainty is unlikely to sour business owners’ positive perceptions of the U.S. economy.

The slowdown in job growth from November 2017, which saw the creation of 216,000 jobs (revised down from initial estimates of 252,000), to December of last year raised some concern about U.S. employment strength regressing somewhat toward the mean. January 2018’s numbers could well assuage any such worries, however. Nearly all of the industries that served as primary engines of expansion for the American workforce last year, such as healthcare, manufacturing, construction, and food and beverage services all added jobs during this month. Most other sectors assessed in the BLS report didn’t grow or contract in any statistically significant ways.

Construction exceeded all other industries in terms of new positions created, with 36,000 of them added in January 2018. Food and beverage businesses weren’t far behind in their creation of new work, supplying 31,000 jobs. Healthcare, which added jobs virtually without cease in 2017 at a pace of about 24,000 per month, did not slow down to start the new year, opening up 21,000 new positions in January. Rounding out the biggest employment upticks were durable goods and general manufacturing, which added 18,000 and15,000 jobs respectively.

According to The New York Times, the recent tax reform legislation passed by Congress and signed into law by President Donald Trump has galvanized the American business community’s outlook for the immediate future, prompting some companies to issue bonuses or raise wages. The long-term impact of the new tax rates is not yet known, and nonpartisan economists continue to express concerns about the law’s ability to pay for itself. Nevertheless, January’s numbers bode well for the progress of the U.S. economy.