After seeing some sluggishness affect its growth earlier in the year - from sectors that the economy has historically been able to depend upon, such as tourism and exports - the gross domestic product of Thailand bounced back in a big way during the fourth quarter of 2018. Citing figures from the country's National Economic and Social Development Council, Bloomberg reported that GDP was up by 3.7 per cent on a year-over-year basis, representing a 0.5 per cent increase from the previous quarter's total for that metric.

The news provider also pointed out that Q4's GDP growth outpaced the projections of economic experts it had surveyed, who expected 3.6 per cent expansion. The year-over-year uptick in this financial category is relatively consistent with the numbers regarding Thailand's overall economic expansion for the entirety of 2018 (4.1 per cent). Growth for the quarter itself came in at 0.8 per cent (after undergoing adjustment for seasonal factors), ahead of economic experts' projections by 0.1 percent.

Strong private consumption and investment served as the drivers for the GDP uptick in Q4, and these market forces were strong enough to stave off any adverse effects stemming from unexpectedly weak performances in exports and tourism. Even the ongoing global trade tensions, including those between China and the U.S., were not capable of offsetting the gains that Thailand's economy experienced. These positive signs also drove the Bank of Thailand to implement an increase to its benchmark interest rate for the first time in seven years during December 2018, though no further rate hikes are expected any time soon.

The main risk that could end up putting a damper on these growth trends is the government's continued reluctance to stick to a date for its first democratic elections since the 2014 military coup. According to Channel News Asia, the date is set for March 24, which represents another delay from a prior date of Feb. 24. 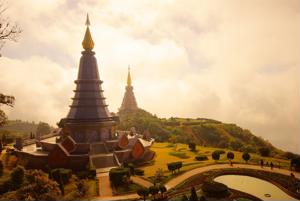