A recent study found that the travel and tourism industry in Greater Cincinnati created $5 billion in revenue, according to the Cincinnati Business Courier. This was a 14 percent increase from 2013.

In other Cincinnati news, local economic leaders recently discussed whether the city could attract Amazon for its second headquarters.

According to Wright, the number of people working in “corporate, subsidiary and regional managing office jobs” in the city is 2.6 times the national average. He also stated that the number of companies with their headquarters in Cincinnati is higher than any large city besides Akron and Fayetteville.

In terms of tech talent, while leaders said that what Cincinnati lacks in tech workers is made up by its status as a center for business.

“While we don’t have tech companies we do have a lot of Fortune 1000 companies, each with very strong in-house IT operations,” said Geoff Smith, co-chairman of the Cincinnati CIO Roundtable trade group. “So, there is kind of a hidden base of tech talent, mature tech talent that may or may not be obvious from the outside.”

The 2016 Metropolitan GDP report from by the U.S. Bureau of Economic Analysis found that Cincinnati was the largest metropolitan economy in Ohio last year, Cincinnati.com reported. The city also rose two spots in the national ranking to reach No. 28. 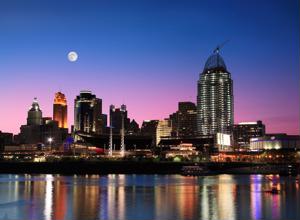