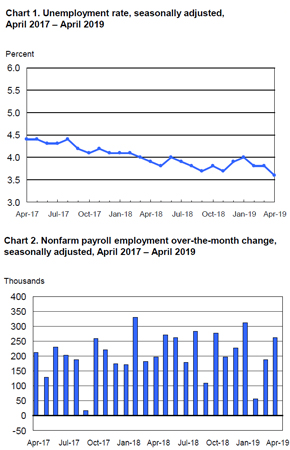 For the first third of 2019, the American economy has continued its winning streak. Job growth kept momentum in April that was in sync with the surge seen during March, after a decline in February that, by now, seems more like an anomaly than anything else. According to the latest edition of the Employment Situation Survey issued by the Department of Labor’s Bureau of Labor Statistics, nonfarm payroll organizations in the U.S. added 263,000 new positions during April. This is over 70,000 greater than March’s addition of 189,000 jobs – a figure revised by the BLS from an initial 196,000 – and ahead of the economists’ polls conducted by Bloomberg and Reuters.

The unemployment rate fell to 3.6 percent, a low not seen since 1969. As noted by The Washington Post, conditions like these constitute what economic experts refer to as “full employment,” since businesses in the U.S. ultimately have more open jobs than there are unemployed people to take them. Joe Stagnaro, president of Pennsylvania operations for the trucking and warehouse firm McLane Company, commented on this in an interview with the Post.

“The economy is good, but that’s … difficult for employers,” Stagnaro told the news provider. “The people you want to hire are employed by someone else.”

He also said that his company was developing an on-site training program so that interested workers who weren’t yet qualified for trucking jobs could learn the necessary skills at no cost and eventually take open positions at McLane. The Post reported this and other internal talent development strategies are growing more common.

There was a slight month-to-month drop in the labor force participation rate from March to April, with this indicator falling to 62.8 percent, but since that number is identical to its total from April 2018, it isn’t considered alarming by the BLS.

Professional and business services beat out all other American industries in terms of hiring by a sizable margin last month, with a whopping 76,000 jobs added to its payrolls. Administrative and support was the biggest category within professional services jobs to see gains. The next-closest sector – construction – added 33,000 new roles. Healthcare also continued its steady trend of considerable growth in April, with organizations in the field bringing on 27,000 new personnel for open positions. Also noteworthy is the sizable jump seen in social assistance services, which grew by 26,000 last month after not showing any statistically significant growth or decline for at least the past 12 months. Lastly, the federal government added 12,500 workers, and the upcoming U.S. Census is likely to drive that total up.

Although manufacturing saw only minor growth (4,000 jobs) and retail trade lost 12,000 workers in April, these negative shifts were not nearly significant enough to derail the overall trend of growth.

Average hourly earnings rose 6 cents to $27.77 in April. Wages increased 3.2 percent on a year-over-year basis last month, unchanged from the year-on-year pace seen in March. However, when examined in conjunction with other economic indicators, it makes for a favorable assessment of current conditions. Torsten Slok, chief economist at Deutsche Bank Securities, elaborated on this in an interview with Bloomberg TV.

“[The report is] clearly telling you this economy is still chugging along very nicely. It is inflationary in the sense that wages did go up but they didn’t go up as much as we had expected. Goldilocks is the best description of this,” Slok said to the business news provider’s television channel, effectively calling the American economic status “just right.”