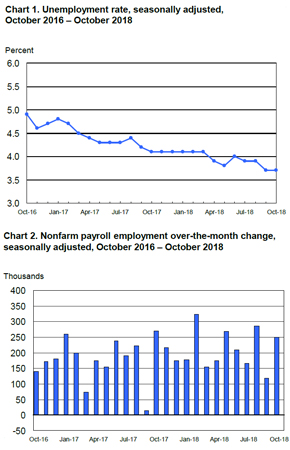 Job growth in October 2018 surpassed September’s numbers and economists’ projections for the month. In its Employment Situation Summary, the Bureau of Labor Statistics reported Nov. 2 that nonfarm payroll employment rose by 250,000 in October. This is significantly higher than Wall Street analysts’ prediction of 195,000, as reported by The New York Times. Michelle Girard, chief U.S. economist at NatWest Markets told The Times, “The underlying fundamentals of the labor market are still really bright, it’s really the strongest part of the broader economy at the moment.” October 2018 represented the 97th consecutive month of job growth in the U.S.

Hurricane Michael, which caused destruction in the northwestern region of Florida, had no recognizable impact on the national employment rates for October. However, jobless claims in Florida and Georgia rose by 10,000 following this storm’s landfall.

The unemployment rate did not change from September’s 3.7 percent. This number represents the lowest figure since December 1969. This amount, as well as the impressive job growth of the month, may influence American voters going into the upcoming midterm elections.

The largest job growth statistic comes from an industry that suffered in September: leisure and hospitality. The sector rose by 42,000 jobs. This is a dramatic rise in comparison to September’s numbers, which were likely impacted by Hurricane Florence. Healthcare took second place in October, with the addition of 36,000 positions. This job growth occurred in a variety of settings, with 14,000 job gains in ambulatory health services, 13,000 in hospitals and 8,000 in nursing and residential care facilities. The professional and business services industry forfeited its previously first place standing when it gained 35,000 in October, a distinguishable drop from its job growth of 54,000 in September. With the fourth largest job growth in October, the manufacturing industry added 32,000 jobs, 10,000 of which occurred in the durable goods sector.

Employment in construction experienced an increase of 30,000 in October, a significant change from its rise of 23,000 in September. Transportation and warehousing displayed a slight expansion in October, with the creation of 25,000 jobs. Meanwhile, the mining industry remained stagnant, with an increase of 5,000 new jobs. Other industries, such as retail trade, wholesale retail, financial activities, government and information did not change significantly in October.

Average hourly earnings of all employees on private payrolls increased by 5 cents, or 0.2 percent, in October, rising to $27.30. This is indicative of a 3.1 percent increase over the past 12 months. It seems to be on-pace with the Consumer Price Index for All Urban Consumers, which increased by 2.3 percent from September 2017 to September 2018. The creation of jobs and all-time-low unemployment rate are impressive during this month. Business leaders, job seekers and economists in the U.S. should be pleased with the current state of employment.

As a result of the continually growing economy, interest rates from the Federal Reserve are likely to keep rising. A CNBC report stated, “Powell [Fed chairman] says we’re ‘a long way’ from neutral on interest rates, indicating more hikes are coming.” The CME Group provided a 75 percent probability of a rate hike by the end of 2018, likely in December.