Employers’ prioritization of hands-on experience – as opposed to educational or scholastic achievements – has spawned a new class of worker. They’re called “new collar,” and the demand for these individuals is particularly robust within the technology sector.

A term coined by IBM, new collar is essentially a hybrid of blue collar and white collar. While the former refers to manual labor-related occupations and the latter characterizes work done within a professional environment – such as an office – new collar jobs are filled by those who have the demonstrated capabilities to accomplish what positions call for, even though they may not have the traditional qualifications, like a college degree.

“The ongoing skills gap has prevented businesses from filling posts as quickly as they would like.”

Those who fall into the new collar category play a key role in America’s labor force. Due to the ongoing skills gap, which has prevented businesses from filling posts as quickly as they would like, new collar workers are getting a closer look. Indeed, lawmakers have even introduced a bill – dubbed the New Collar Jobs Act – that would provide tax incentives for employers who provide training in related competencies, according to U.S. News & World Report.

Joanna Daly, vice president of talent at IBM, told the publication that new-collar jobs are red-hot in the tech industry.

Police using tech to enhance transparency
Part of the reason for the new collar explosion in the tech sector stems from a greater reliance on state-of-the-art technology to magnify professional capabilities – in virtually every industry. Law enforcement is a classic example. Throughout the country, more police departments are equipping their officers with body cameras. According to the National Conference of State Legislatures, 34 states – as well as the District of Columbia – have created laws that govern how body cameras are meant to be used. Designed to improve transparency and accountability, wearable surveillance can corroborate or refute that events during an arrest or any other interaction with the public transpired as they’re described.

Tech specialists and designers help develop this equipment that officers wear, but so do the people who may have backgrounds in police enforcement, providing their opinions and on-the-ground experience regarding how body cameras can be more effectively leveraged.

New collar bridging gap to alternative lines of work
People from a wide variety of job-related backgrounds are finding success in the new collar domain. Twenty-nine-year-old English major Meryl Dakin has held several job titles since she graduated from college, including au pair, bartender and operations officer. But after striking up an interest in coding and taking a few courses, she’s now a software engineer at a for-profit school.

“I’ve never been in a profession where there is more demand for me,” Dakin told CNBC.

From software troubleshooting to design development, computer literacy to interface design, new collar skills are in high demand. Job seekers with backgrounds in these or other tech proficiencies might want to see what’s out there – their dream job may be just a phone call or click away. 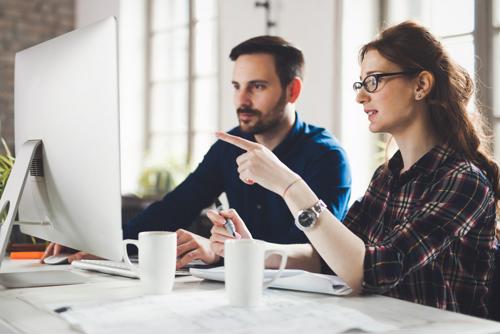