The roaring economy has seen not just tens of thousands or even hundreds of thousands, but million of jobs created by various businesses over the past few years. A leading industry in this employment expansion is manufacturing. The sector has produced an average of 22,000 jobs per month between February 2018 and the corresponding period this year, according to the most recent jobs data from the Bureau of Labor Statistics.

The sector’s remarkable run continues to this day, with several well-known companies opening their doors to more go-getters. Case in point: Intel.

As reported by the New Mexico Economic Development Department, the Santa Clara, California-based semiconductor development company is in the midst of a major recruitment push in the Land of Enchantment, looking to hire at least 300 individuals to fill roles at its manufacturing plant in Rio Rancho.

Katie Prouty, manager at Intel’s aforementioned facility, said the resources the company has devoted toward production in New Mexico have paid off in a big way.

“The Rio Rancho site continues to be an important part of Intel’s global manufacturing network, and is manufacturing semiconductor products that are critical to Intel’s ability to secure, power and connect billions of devices and the infrastructure of the smart, connected world,” Prouty explained.

The tech components firm arrived in the Southwest back in 1980. Since that time, Intel has become New Mexico’s largest manufacturing employer, with $16 billion added to the state’s economy through the company’s strategic investments, according to the New Mexico Economic Development Department. Overall, Intel employs roughly 110,700 people approximately across the country, 1,200 of whom presently work in Rio Rancho.

400 manufacturing jobs in store for Huntsville residents
Meanwhile, in Huntsville, Alabama, one of the world’s largest automakers is also looking to expand its manufacturing staff. As reported by ABC News affiliate WAAY, construction will begin in a few months for a Mazda Toyota manufacturing facility there. By the time the $110 million auto parts facility is fully operational, the company’s on-site supplier – DaikyoNishikawa – intends to hire 400 job seekers to start straight out of the gate. An additional 4,000 jobs will be coming to Huntsville between Mazda-Toyota and DNUS over the long run.

Alabama Governor Kay Ivey said she’s extremely excited about the collaboration and the opportunities that await for hundreds of residents in the Yellowhammer State.

“For decades, Alabama has built strong relationships with many leading Japanese businesses, and I know that we will forge a productive, long-lasting partnership with DaikyoNishikawa,” Kay said in a press release, provided by the governor’s office. “We’re pleased that this world-class automotive supplier has selected our state for the site of its first U.S. manufacturing facility and look forward to seeing it put down roots in Sweet Home Alabama, where so many of our Japanese partners have found success.”

The Midwest is also helping contribute to the industry’s growth spurt. Foxconn Technology Group, an electronics company headquartered in Taiwan, is poised to hire 30 people for its manufacturing facility in Milwaukee, according to Milwaukee Business News. The company made the announcement this past April and intends to fill roles in various positions throughout the manufacturing spectrum and levels of experience, including engineers, equipment technicians and manufacturing associates. An estimated 13,000 people in Wisconsin will have new jobs with the company by the time the recruitment period is completed.

“Nearly 90% of executives within the sector agree that a talent shortage exists.”

9 in 10 execs say worker shortage is very real
Despite the industry’s impressive progression, it may still come up short of the goal line for filling all the roles either open or being created. Nearly 90% of executives within the sector agree that a talent shortage exists, according to a study done by Deloitte and the Manufacturing Institute. That’s up from 84% who indicated as much in a similar poll conducted in 2015.

As the economic expansion in the U.S. continues, manufacturers are at the vanguard, filling roles as quickly as possible to take full advantage of the more prosperous period. 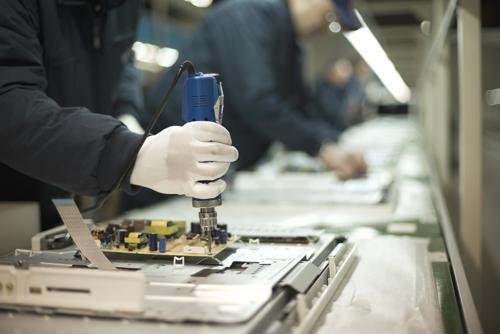