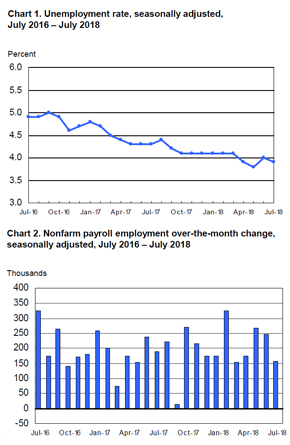 The job gains initially estimated by the U.S. Bureau of Labor Statistics for June were recalculated from 213,000 to 248,000. As such, some economists consider the total increase in nonfarm payroll employment for July – 157,000 jobs – an even more significant decline from June’s numbers. Other analysts see it more as a regression to the mean: a more typical and sustainable pace of healthy job growth than the almost hyper-real gains that long stretches of 2017 and 2018 have seen.

That said, the July figure is considerably less than what some experts predicted: Economists surveyed by Bloomberg expected a mean increase of 193,000 jobs, while a similar questionnaire from Reuters came up with an average prediction of 190,000 new positions. The unemployment rate, by contrast, was widely expected to fall from June’s 4.0 percent – which it did, to reach 3.9 percent in July. The labor force participation rate held steady at 62.9 percent.

Many of the industries that saw notable increases in positions added were the same between June and July: Professional and business services once again took the No. 1 spot, with 51,000 new positions created, while manufacturing took second place with 37,000 jobs added. Both of these sectors also saw a month-to-month uptick of exactly 1,000 jobs from June to July. Healthcare came in third again this July, but with stronger numbers than what was seen in June – 34,000 new roles created as opposed to 26,000 the month prior.

Food services and drinking places was a new addition to the list of statistically significant job gains, with 26,000 new workers added to its payrolls. Seasonal factors likely drove this, given the tendency of July and August to serve as primary vacation time. Construction and retail trade were the last two sectors to see any notable uptick in employment, with 19,000 and 7,000 jobs added, respectively.

No broad sector of the American economy experienced significant labor force decline, though retail’s gain would’ve been much greater if not for a loss of 32,000 positions in sporting goods, hobby, book and music stores. Clothing, general merchandise and food and beverage stores offset that drop with healthy job growth.

“The story is pretty much the same,” Sharif said to the news provider. “Job growth is still very strong. It’s still a disappointment on wages still with the unemployment rate this low. We are still fluctuating between 2.5 percent and 2.8 percent in year-over-year wage growth. The labor story hasn’t changed very much. Everything else looks pretty solid. We are just waiting for wages to accelerate. We can’t seem to budge out of this range.”

BLS figures show that wage growth increased from June to July, jumping from 5 to 7 cents in terms of additions to average hourly earnings – a 0.3 percent jump, as predicted by the economists Bloomberg surveyed. Measured year-over -year, it’s not quite as positive, with a 2.7 percent increase between July 2017 and 2018, identical to June’s year-on-year wage gain.

The Federal Reserve increased federal benchmark interest rates in July, as expected, with many predicting another rate hike in September. Sharif cautioned against assuming this was “a done deal,” however, noting that the Fed will examine “more than just the labor market to determine further hikes.”

In big-picture terms, the U.S. economy remains considerably solvent, but this could change somewhat if trade tensions with other nations – especially China – become more intense.