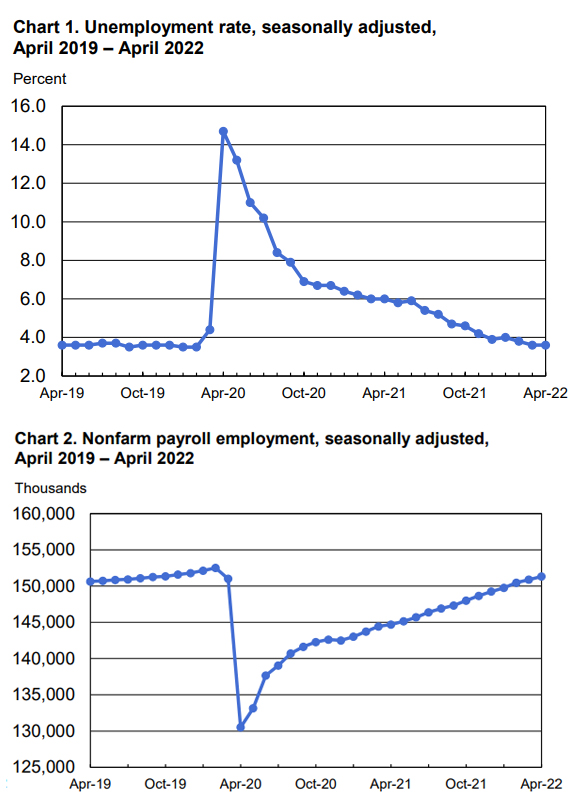 Despite rising interest rates, fears of an economic slowdown, and geopolitical turmoil, the U.S. Bureau of Labor Statistics (BLS) reported the economy added 428,000 jobs in April.

Unemployment remained unchanged at 3.6 percent. Among the college-educated civilian workforce, the primary target of the MRINetwork’s recruitment efforts, the unemployment rate remained at 2.0 percent pointing to a continued constrained labor market.

The number of job openings rose to 11.5 million by the end of March — indicating there are close to two open jobs for every unemployed person.

The number of employed persons reporting they had worked remotely at some point in March declined again to 7.7 percent as COVID-19 restrictions were lifted throughout the country and changes in employer policies increased on-site activity.

“Over 420 of our MRINetwork’s best recruitment professionals and talent advisors will meet in Fort Worth, Texas next week. With a theme of ‘Build-Learn-Connect-Engage,’ we will deliver incredible usable content in a unique learning environment to amplify and elevate our recruitment and talent consulting skillsets.

I mention this in context of today’s BLS Employment Situation Report to make a point. Regardless of any single data report, like today’s April employment growth of over 400,000 jobs, both growing talent-hungry firms and talented executive, technical, managerial and professional performers need to focus on building teams and leadership skillsets to drive future growth,” said Bert Miller, President, and CEO of MRI, one of the world’s leading search and recruitment organizations.

“A critical component of building organizations and individual careers is overcoming self-limiting fears. I have seen smart managers seemingly hit a ceiling once they have achieved a significant milestone like a successful product launch or earning a big promotion. At this point many allow a self-limiting mindset to hold themselves back and leave much future capacity and capability on the table.

Challenge yourself and your organization to constantly dream big. Peel back any fear or self-limiting mindset and don’t get comfortable with today’s success while pressing forward to take on the next goal.”

Mark Zandi, chief economist at Moody’s Analytics, provided a longer-term view of this month’s results, “The labor market continues to barrel along. We need it, at this point in time, to slow down a bit because we’re going to blow past full employment and inflation is going to become a bigger problem than it already is. Ultimately, we need to get to something that’s closer to no more than 100,000 a month.”

Noting that this is the 12th straight month of job gains above 400,000, though easing from a February gain of 750,000 jobs, Wall Street Journal reporter Josh Mitchell commented, “The labor market’s latest issue has been on the supply side, with an unusually tight pool of workers available to fill jobs, a dynamic that has fueled record wage growth and put pressure on rising inflation. In March there were just under six million unemployed people seeking work.” In the same article Kathy Bostjancic, chief U.S. economist at Oxford Economics added, “Anecdotally companies are still saying the biggest issue is a lack of available workers.”

Job gains in April were broad-based with moderate increases in most segments.

Employment in leisure and hospitality increased by 78,000 in April. Job growth continued in food services and drinking places (+44,000) and accommodation (+22,000).

In April, employment in professional and business services continued to trend up (+41,000). Since February 2020, employment in the industry is up by 738,000.

Financial activities added 35,000 jobs in April, led by a gain in insurance carriers and related activities (+20,000).

“Talented performers open their eyes wider than they thought possible — remove any blinders and seek a view that seems far away and yet, is within reach.

They are curious and intentional about learning and recognize where obtaining new skills and up-skilling will provide a clear career advantage.

None of us are what we can become. Eyes open and keep looking and working to see who you can become — you might just find yourself in place that you had never dreamed,” noted Miller.