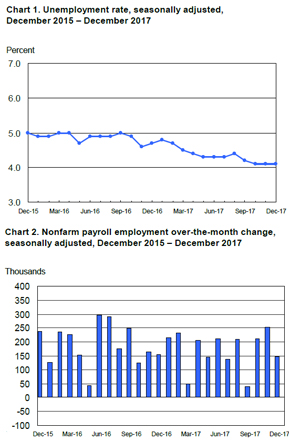 For much of 2017, the expansion of job growth throughout the U.S. trended steadily upward. There were only a few notable instances of slowdown, such as the hurricanes that hit Florida, southeast Texas and the Gulf Coast area in late summer. Per the latest numbers from the U.S. Bureau of Labor Statistics, the year ended with jobs gained as well, albeit at a more modest pace: 148,000 total nonfarm jobs were added in the month of December. The employment rate, meanwhile, remained at 4.1 percent during the same period, holding fast to the level it initially dropped to in October.

CNBC noted that the December figure for employment creation did fall short of numerous projections, and represented a drop of more than 100,000 jobs from November 2017, during which revised BLS numbers state that the economy added 252,000 jobs. These economists and other experts had expected a gain of about 190,000 new positions. However, the relative shortage of workers available to fill jobs – as evidenced by static 4.1 percent unemployment, and a similarly steady labor force participation rate of 62.7 percent – began to take its toll.

The industries driving the job gains that were seen in December 2017 were in line with those that fueled employment growth for much of the year. Healthcare saw the largest single sector-wide expansion, with 31,000 positions created, though construction was not far behind at 30,000 jobs added. Manufacturing, as well as food and drink services, also saw statistically significant job creation, with both of these fields adding 25,000 new roles to their nationwide payrolls. Professional and business services saw little change, adding 19,000 jobs over the month.

Most of the other sectors tracked by the BLS did not see any noteworthy growth or contraction. Retail trade proved to be the exception, with a decline of 20,000 positions. This may appear surprising, given that MasterCard recently announced a record-setting 4.9 percent increase in holiday sales across the U.S. Yet that drop was in line with 2017’s trend for the industry, as it lost 67,000 jobs over the course of the year, a reversal from the 203,000 retail positions added in 2016. David Berson, chief economist at Nationwide, told The Washington Post that the continued rise of e-commerce may have helped that decline.

“That’s a notoriously volatile number around the holiday season, but it also reflects in part that increasing numbers of sales are coming from e-commerce and not brick-and-mortar stores,” Berson said, according to the news provider. “That’s part of a longer-term decline in that sector.”

Yahoo Finance noted that overall 2017 job growth makes the lack of notable expansion in American employees’ wage rates throughout the year puzzling to a significant number of economists.

Hourly earnings rose 0.3 percent in December and 2.5 percent on a year-over-year basis, in line with predictions. However, wages are not accelerating to a degree experts believe is fully commensurate with the upticks in employment seen throughout the U.S. economy during the last several years. According to Yahoo, the slow pace of earnings growth makes it unlikely, thus far, that the Federal Reserve will raise interest rates in 2018 beyond its three previously scheduled rate hikes.

All told, despite December numbers falling below expectations, 2017 can accurately be considered a good year for American jobs, which will brighten employers’ expectations as 2018 begins.