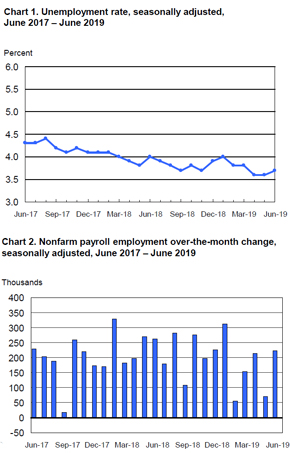 The June Employment Situation showed a large increase in nonfarm payroll employment to the tune of 224,000 new jobs, according to the U.S. Bureau of Labor Statistics. This comes off the heels of a growth reduction for May’s figures which saw just 75,000 jobs added, which was the only month in 2019 (since February) to fall short of six-figure growth.

According to Bloomberg, U.S. hiring rebounded and topped all economists’ estimates, “a sign of labor-market strength that may ease calls for a Federal Reserve interest-rate cut.”

Notably, the number of additional jobs signified a huge boost when compared to Bloomberg’s estimate, which was based on economists projections of 160,000 new jobs versus the 224,000 reported.

Reuters, however, reported that while job growth has rebounded from a weak May, “moderate wage gains and mounting evidence that the economy was slowing sharply could still encourage the Federal Reserve to cut interest rates this month.”

Additionally, the average wages paid to U.S. workers saw an increase of 6 cents to $27.90.

One industry that unsurprisingly saw significant job growth in June is professional and business services. As in previous months, the sector saw the largest number of jobs added in June (51,000). Notably, however, this was up from a much smaller employment change in May of only 24,000 positions added for the industry.

Others industries added a noteworthy amount of jobs throughout the month included the healthcare industry which saw an increase in 35,000 roles for the month. Transportation and warehousing also added 24,000 jobs and construction saw an upward trend of 21,000 newly added positions. Meanwhile, there were an additional 17,000 manufacturing jobs for the month.

Taking the report as a whole, news services came to different analyses of what this month’s report could mean for the U.S. economy as a whole. Bloomberg, for instance, stated that the report could bolster U.S. President Donald Trump’s ideas about the strength of the economy.

“The report may offer President Donald Trump another chance to boast that the world’s largest economy is in the best shape ever,” according to Bloomberg. However, this also comes as Trump has repeatedly called for Fed Chairman Jerome Powell to slash interest rates, which is coming “just as the 2020 campaign begins.”

“It’s a really, really strong report across the board,” Torsten Slok, Deutsche Bank chief economist, said in an interview with Bloomberg Television. “If the Fed is thinking about making insurance cuts, you think about what they are insuring themselves against?”

According to MarketWatch, “Even though the economy has slowed, the strongest labor market in decades is likely to extend what’s already the longest expansion on record. The U.S. has grown for 121 straight months.”

Looking ahead, the news service notes that while there has been continued economic growth for the U.S., according to this report, simmering trade tensions between the U.S. and China “could hurt the economies of both countries and cause a global downturn. Businesses have complained for months that trade disputes have hampered their ability to plan and invest.”