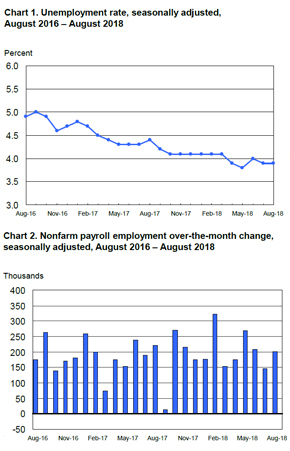 August was a strong month for employers across most segments of the U.S. economy, particularly in the wake of a July performance that notably underperformed the expectations of economic analysts, businesses and governments alike. According to the latest Employment Situation Summary from the Bureau of Labor Statistics, American nonfarm organizations in both the private and public sectors added 210,000 jobs to their workforces.

This figure stands well above the 147,000 new positions created in July (downwardly revised from an initial estimate of 157,000) and also exceeds the median prediction by Bloomberg-surveyed economists, who expected to see 190,000 jobs added during the month. Meanwhile, the unemployment rate held fast to its July figure of 3.9 percent (about 6.2 million unemployed persons actively looking for work) in August, and this did slightly fall behind the estimate of economic experts Reuters polled, who predicted a drop to 3.8 percent.

Michael Gapen, chief U.S. economist at Barclays, pointed out in an interview with The New York Times that figures such as these indicated some of the fears over international trade wars were, for now at least, somewhat overblown.

“What’s worth noting is that even though there still remains a lot of headline noise around politics and protectionism, underneath that, the U.S. economy – and that includes labor markets – is doing quite fine,” Gapen told the newspaper.

Professional and business services remained the top performer in terms of employment creation among American industries, adding 53,000 jobs during August. Healthcare came in second, with 33,000 new roles added, while construction and wholesale trade were nearly tied with their respective gains of 23,000 and 22,000 jobs. (By contrast to its wholesale counterpart, retail trade, after a few months of back-and-forth, didn’t see any major change in August).

There were some notable differences between the August and July reports in terms of industries showing statistically significant increases or declines. Transportation and warehousing, which has not risen or fallen much throughout 2018, saw a big jump of 22,000 new positions created in August. Mining also added jobs this past month after showing no significant movement in July, although these almost all came from mining support services, as has been the case for many of the previously reported increases within that particular field over the past year.

Some economists will see manufacturing’s decline in employment – a loss of 3,000 positions in August – as the biggest surprise in the BLS’s latest jobs report. Considering that the field added 37,000 jobs in July and 36,000 in June, as it has for nearly a year starting in 2017 and continuing through to 2018. Any drop counts as a notable negative change in light of a White House administration under President Donald Trump that repeatedly pledged to bring back manufacturing jobs – and also, with good reason, has cited economic gains as its biggest success. This could be attributable to a slight drop in the labor force participation rate, which fell 0.2 percent to reach 62.7 percent.

That said, a loss of 3,000 roles could easily be offset by even a relatively modest jobs gain for September.

The August BLS report also contained other significant positives. Wages grew by 0.4 percent when analyzed by average hourly earnings, rising 10 cents to reach $27.16. When looked at on a year-over-year basis, the gain is even more impressive – 2.9 percent between August 2017 and 2018.

Indications also exist of some trade tensions between the U.S. and other nations beginning to abate somewhat. CNN reported Aug. 28 that President Trump and outgoing Mexican President Enrique Peña Nieto agreed on several adjustments to the North American Free Trade Agreement, most of them meant to ensure both nations were able to maintain strong involvement in auto manufacturing. Peña Nieto expressed hope that Canada would accept the revisions, which would further advance NAFTA renegotiation efforts. However, according to another Reuters report, Canada and America still remain at odds over several industries, most notably dairy, lumber, media and steel.