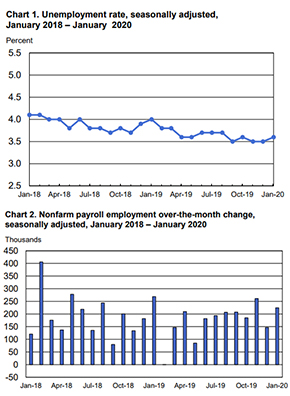 In the Bureau of Labor Statistics’ Employment Situation report, the U.S. saw employment rise by 225,000 in January, while unemployment remained about the same at 3.6%.

The numbers show that “U.S. employers ramped up hiring in January and wage gains rebounded, providing fresh evidence of a durable jobs market that backs the Federal Reserve’s decision to stop cutting interest rates and hands President Donald Trump an early election-year boost,” according to Bloomberg.

Notably, there were strong gains in a number of industries during January, according to the report, including construction, healthcare and transportation and warehousing.

Along with the strong job gains and a low unemployment rate, the numbers beat estimates for growth in January, according to the news publication. “Payrolls increased by 225,000 after an upwardly revised 147,000 gain in December, according to a Labor Department data Friday that topped all estimates of economists. The jobless rate edged up to 3.6%, still near a half-century low, while average hourly earnings climbed 3.1% from a year earlier.” In advance of the report, business experts anticipated a lower total of around 150,000 jobs, suggesting that a slowdown was inevitable given the economy’s long expansion. January was the 112th straight month of job growth since 2010.

“The report is unambiguously good,” said Ed Campbell, portfolio manager at QMA, in an interview with CNBC. “Strong growth and decent but not runaway wage growth should be good for stocks. Of course, we’ve had such a strong week, the markets are taking this in stride given how much we’ve been up so far.”

Year over year, the job gains in January 2020 were much higher than in 2019 when 175,000 employees joined the workforce. In December, women outnumbered men in the workforce for just the second time in history. That number was mostly unchanged in January, with women continuing to make up just over 50 percent of employees.

The Bureau of Labor Statistics broke down the growth by industry: First, the construction industry saw a strong employment boost for the month with employment rising by 44,000. “Most of the gain occurred in specialty trade contractors, with increases in both the residential (+18,000) and nonresidential (+17,000) components. Construction added an average of 12,000 jobs per month in 2019,” as noted by the data. Interestingly, Bloomberg mentioned that the gains in the construction industry were in part due to the “unseasonably warm month.”

Second, the healthcare industry also experienced strong numbers for the month, adding 36,000 jobs. It’s been a strong year too: “Healthcare has added 361,000 jobs over the past 12 months,” according to BLS data.