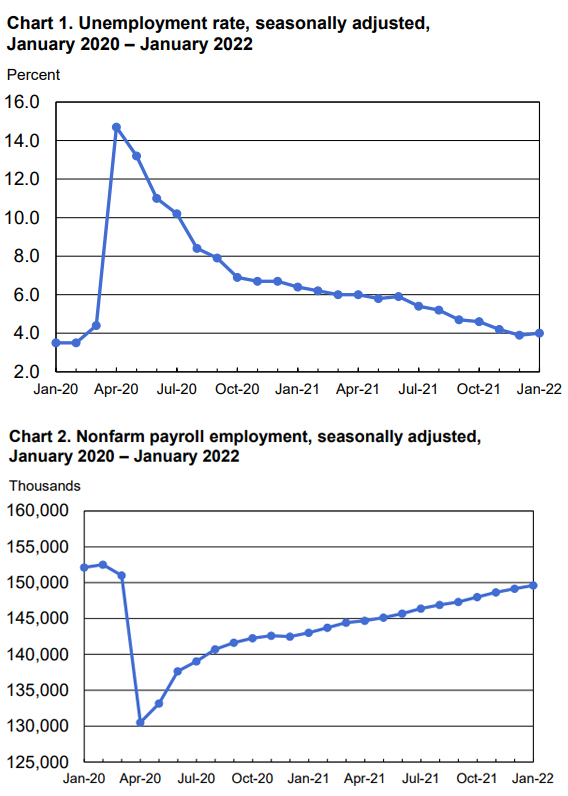 Total non-farm payroll employment rose by 467,00 in January, well above analyst’s estimates that had factored in a significant impact for the COVID-19 Omicron variant. Today’s U.S. Bureau of Labor Statistics (BLS) report also noted the unemployment rate edged higher to 4.0 percent. The unemployment rate for college-educated members of the civilian workforce increased slightly to 2.3 percent but still at a level indicating near full employment in this demographic.

Notable job gains occurred in multiple sectors, with the highest increase in leisure and hospitality.

The labor force participation rate data increased slightly to 62.2 percent but remained below the pre-pandemic level of 63.4 percent.

The percent of non-farm workers reporting that they teleworked at some point in the past four weeks jumped to 15.4 percent versus 11.1 percent in December 2021. The increase might be due to short-term effects of the jump in Omicron infections throughout January.

“January’s BLS report tells a short-term story about the effects of the Omicron surge as an estimated 9 million workers called in sick in early January and employee work-from-home rates increased. These factors clouded the jobs data forecasts. In our most recently reported month, December 2021, our MRINetwork of over 300 search firms and more than 1,500 recruitment professionals saw through the clouds. Network revenue from search assignments increased 25% versus the previous December. Our view is underlying demand for executive, technical, professional and managerial talent remains strong,” said Bert Miller, President and CEO of MRI. “I’ve been in the executive recruitment business for over 27 years and have seen economic cycles drive peaks and valleys in hiring demand. What I haven’t seen is top performing firms easing up on the hiring throttle as they continue to build best-in-class leadership, sales, marketing, and operations teams. Talented individuals are in demand today and will continue to be in demand through virtually any business cycle. That’s why we continue to help our clients to build and effectively communicate their hiring brand, culture, and core values to attract the best talent.”

Wall Street Journal reporters Sarah Chaney Cambon and Gabriel T. Rubin observed, “Many workers are reaping their largest pay gains in years, as companies compete for a limited pool of workers. Wage growth — at nearly 5% — is much stronger than the average of about 3% before the pandemic hit. They also quoted Luke Tilley’s, chief economist at Wilmington Trust Investment Advisors, observation that ‘The labor market is as tight as we have ever seen it.’

Goldman Sachs economist Spencer Hill noted that people who reported they couldn’t work because their employer closed or lost business due to the surge were likely offset by fewer-than-normal year-end layoffs as many companies were hesitant to let workers go amid widespread labor shortages.

Employment in leisure and hospitality expanded by 151,000 in January, reflecting job gains in food services and drinking places (+108,000) and in the accommodation industry (+23,000). This industry was among the hardest hit since the onset of the virus. Employment in leisure and hospitality is down by 1.8 million, or 10.3 percent since February 2020.

Employment in healthcare and wholesale trade continued to trend up +18,000 and + 16,000 respectively. Employment showed little change over the month in mining, construction, manufacturing, information, financial activities, and other services.

“At our recent MRINetwork leadership conference I repeated Nelson Mandela’s sage advice, ‘There is no passion to be found playing small — in settling for a life that is less than the one you are capable of living.’ Our advice to talented professionals both starting their careers and with decades of experience reflects that sentiment. The key factor differentiating why some candidates go on to run companies and live the life they want personally, professionally, and financially is overcoming self-limitation. Individuals have more control over their careers today than perhaps ever. We urge people to think big — think infinite and to be courageous enough to maximize and live the life you are capable.

“It’s clear from my vantage point that those who never limit themselves or play small are the people today’s leading companies will target. My best advice for any manager or professional … Do not play small and Do not settle. If you do, you will limit yourself and be less than you are capable. Think big, be humble, tirelessly work on your game and be courageous,” noted Miller.