With the looming anticipation of a Federal Reserve interest rate hike, all eyes were on the numbers this morning but the newly released data for job growth fell far short of expectations. 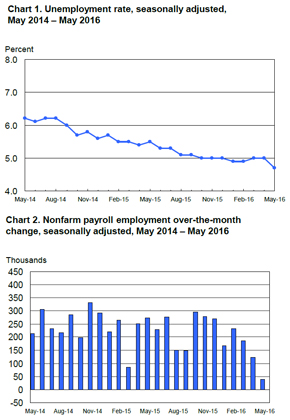 Despite early predictions that the May labor market would hold steady to support the Fed’s outlook for a mid-summer hike, the Friday report from the U.S. Bureau of Labor Statistics told otherwise. According to the employment situation report, nonfarm payroll employment changed little last month, adding just 38,000 jobs.

Economists surveyed by Reuters believe the impact of the Verizon strike contributed to a large dent in job growth, reported the source. Close to 36,000 employees of the national telecommunications company went on strike for six weeks. As the workers on strike did not receive salaries during the payrolls survey week, they were considered unemployed.

The unemployment rate fell to 4.7 percent, a 0.3 percent drop from the month previous, according to the report. The number of long-term unemployed – those looking for jobs for more than 27 weeks – also fell, down 178,000 people.

Economists had forecast the economy to add 160,000 jobs in May, according to NPR. The actual number of 38,000 added positions was the smallest gain since 2010, considered “shockingly low,” by Marilyn Geewax, NPR business editor.

Numbers from the last three months bring the average monthly job growth to 116,000, which is generally seen as a very low rate by economists. Even the expected gain of 160,000 jobs would have been relatively dim. That would have kept in line with population growth and would have been adequate, reported the source.

The drop among information employment was due largely to the Verizon strike, but the mining and manufacturing sectors continued to show job losses as well. Mining employment for May dropped by 10,000, bringing the total number of jobs lost in the industry since September 2014 to 207,000. Employment in durable goods in the manufacturing sector fell by 18,000.

Healthcare continued to see job growth last month, adding 24,000 positions in ambulatory healthcare services, 17,000 in hospitals and 5,000 in nursing care facilities. This sector has now added a total of 487,000 jobs over the year.

Following a 9-cent increase in April, average hourly earnings for all employees on private nonfarm payrolls advanced 5 cents to $25.59.

Hopes that May’s report would indicate when the Fed would raise short-term interest rates – an initiative to bring rates back to normal – have largely diminished. The low job growth means the Fed, which meets again in two weeks, will now likely wait to make a decision.

However, the Verizon workers who returned to work June 1 are expected to boost job growth for the coming month. Requesting higher wages and better working conditions, employees finally reached an agreement with the company after the U.S. Department of Labor intervened.