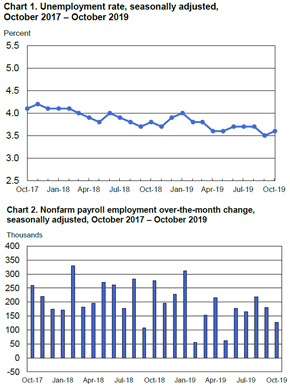 “U.S. hiring was unexpectedly resilient in October and prior months saw sharp upward revisions, offering hope that the labor market can propel consumers to keep spending and extend the record-long expansion despite weak business investment and trade tensions. Stock futures and the dollar rose while Treasuries dropped,” according to Bloomberg.

As CNBC claimed, October job creation easily beat other estimates despite the GM strike. “Nonfarm payrolls rose by 128,000 in October as the U.S. economy overcame the weight of the GM autoworkers’ strike and created jobs at a pace well above expectations. Even with a decline of 42,000 in the motor vehicles and parts industry, the pace of new jobs well exceeded the estimate of 75,000 from economists surveyed by Dow Jones,” according to the publication.

Additionally, CNBC stated that the strong jobs report could also be a boon for the U.S. economy at large. “The report helps further quell worries that the U.S. economy is teetering toward recession and helps affirm the assessment from most Federal Reserve officials,” according to the publication.

This comes just as central bank leaders touted the strength of the U.S. economy in recent days, as reported by CNBC. “The Fed earlier this week lowered its benchmark interest rate a quarter point, the third such move this year, but Chairman Jerome Powell clearly indicated that this likely will be the last cut for some time unless conditions change significantly,” as noted by the publication.

“Overall the labor market is holding up very, very nicely,” said Michael Brown, principal U.S. economist at Visa, in an interview with Bloomberg. “There’s no signs here the consumer is losing any momentum.”

Broken down by industry, there were job gains in food services, social assistance, and financial activities. “In October, food services and drinking places added 48,000 jobs. Job growth in the industry has averaged 38,000 over the past 3 months, compared with an average monthly gain of 16,000 in the first 7 months of 2019,” according to the BLS. Meanwhile, social assistance saw a 20,000 increase in October, while financial activities employment rose by 16,000.

Other sectors to see growth were professional services, which increased by 22,000 jobs for the month, and healthcare, which saw a 15,000 increase.

Two industries saw decreases, however, according to BLS data: “Manufacturing employment decreased by 36,000 in October. Within manufacturing, employment in motor vehicles and parts declined by 42,000, reflecting strike activity.” According to Bloomberg, this was a huge drop. “Manufacturers subtracted 36,000 jobs, the biggest drop since 2009, though it would likely have been a gain without the effects of the strike. Still, even excluding the impact of the walkout, the sector has become increasingly fragile amid slowing global growth, a strong dollar and an ongoing trade war with China,” as noted by the publication.

Meanwhile, “federal government employment was down by 17,000 over the month, as 20,000 temporary workers who had been preparing for the 2020 Census completed their work,” according to the report.