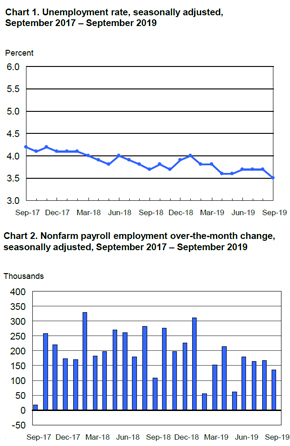 The September Employment Situation showed a total nonfarm payroll job increase of 136,000, which is slightly higher than the August report that saw a 130,000 raise. However, this number notably failed to meet estimates, according to numerous media reports.

“Private payrolls expanded by 114,000 after an upwardly revised 122,000 advance the prior month, according to a Labor Department report Friday that missed the median estimate of economists for a 130,000 gain,” reported Bloomberg. Interestingly, about 1,000 of those jobs were due to temporary government workers being hired in order to prepare for the upcoming Census.

In terms of the job increase estimates, Bloomberg calculated that economists “had projected 145,000 new jobs with the unemployment rate remaining at 3.7% and average hourly earnings rising an unchanged 3.2%.”

In some good news, though, the unemployment rate actually declined to 3.5%. According to the Bureau of Labor Statistics, “The last time the rate was this low was in December 1969, when it also was 3.5 percent.” The report continues, “Over the month, the number of unemployed persons decreased by 275,000 to 5.8 million.”

“Overall it is a bit of a mixed bag,” Torsten Slok, Deutsche Bank Securities chief economist, said in an interview with Bloomberg Television.

CNBC reported that the job report showed more important job gains: “A more encompassing measure that includes discouraged workers and the underemployed also fell, declining 0.3 percent points to 6.9%, matching its lowest in nearly 19 years and just off the all-time low of 6.8%.”

Interestingly, the latest jobs data may not mean much in terms of cuts to the Fed interest rate, according to CNBC. “While the low unemployment rate is one sign of economic strength, the weakness in wage growth shows that the central bank remains a good distance from its goal at maintaining an inflation rate around 2%,” as the news services reports.

In an interview with CNBC, Gad Levanon, the North America chief economist at The Conference Board, said: “Overall, this report provides more evidence that the labor market is still healthy and does not necessarily increase the likelihood of further rate cuts by the Federal Reserve in the remainder of the year.”

And specific demographics also saw strong unemployment growth, according to the publication. As CNBC reported, “The jobless rate for Hispanics also hit a new record low, while the level for African Americans maintained its lowest ever.”

However, while there were some inroads for certain segments of the population, there were some problems with wage growth, according to the latest BLS report. “Wages were a disappointment, with average hourly earnings little changed over the month and up just 2.9% for the year, the lowest increase since July 2018,” as CNBC noted.

Meanwhile, when looking at the specific industries that saw the most job growth, the BLS data showed that the healthcare industry led the way. According to the report,“In September, healthcare added 39,000 jobs, in line with its average monthly gain over
the prior 12 months. Ambulatory healthcare services (+29,000) and hospitals (+8,000) added jobs over the month.” Additionally, employment in professional and business services also saw an increase, raising 34,000 jobs for the month of September.

But the retail industry took the biggest hit in job gains over the course of the month, according to the report. “Retail trade employment changed little in September (-11,000). Within the industry, clothing and clothing accessories stores lost 14,000 jobs, while food and beverage stores added 9,000 jobs. Since reaching a peak in January 2017, retail trade has lost 197,000 jobs.”

Other industries, such as mining, construction, manufacturing, wholesale trade, information, financial activities, and leisure and hospitality, didn’t see much growth or declines in September.