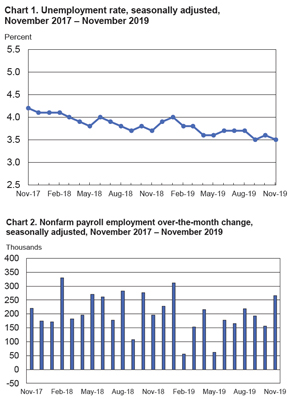 U.S. jobs gains beat estimates by a wide margin in November, according to the Bureau of Labor Statistics, as payrolls increased by 266,000 for the month. In doing so, unemployment matched a historic, 50-year low and the percentage of those without jobs in the U.S. stayed the same at 3.5%.

The increase in jobs was the most since January, according to Bloomberg, and beat estimates by a wide margin. In fact, the news publication said that the 266,000 figure topped estimates of just 180,000 and proved much higher than the October job gains of 156,000. The BLS also revised new job totals in October to 156,000 from 128,000. September’s gain was raised to 193,000 from 180,000. Wage growth also continued to advance. Average hourly earnings in November went up by seven cents, which annualizes to wage growth of 3.1%, well ahead of inflation.

One reason for the strong job growth? “It was the first full month that General Motors Co. workers returned to work after a 40-day strike, adding 41,300 to automaker payrolls following a similar drop the prior month,” according to Bloomberg.

As a result of the tremendous job gains, it’s likely that the Federal Reserve will hold interest rates steady for the month.

According to MarketWatch, “Over the past three months, the economy had added an average of 205,000 new jobs a month. That’s down from a 223,000 average in 2018, but still quite vigorous more than a decade into an economic recovery.”

However, the publication noted that these strong jobs numbers may not be as regular an occurrence next year. “Most economists don’t think it can last, though. The slowing economy has caused some companies to scale back hiring while skilled and even unskilled labor has become hard to find in the tightest labor market in decades. Many firms say they have had to leave positions unfilled because of a lack of talent,” the publication notes.

Meanwhile, when looking at specific industries that saw the most job growth, BLS data showed that the healthcare industry, professional and technical services industry and manufacturing industry saw notable gains for the month. For example, November saw an increase of 45,000 jobs within the healthcare industry. “The November job gains occurred in ambulatory healthcare services (+34,000) and in hospitals (+10,000). Healthcare has added 414,000 jobs over the last 12 months,” according to the BLS report.

The leisure and hospitality field also saw an increase with 45,000 jobs added in November, while the manufacturing industry saw a 41,000 boost as noted above.

However, CNBC notes that the news was not all rosy for all industries and for job gains. “As the holiday shopping season accelerated, retail companies added just 2,000 net hires as gains in general merchandise of 22,000 and motor vehicle and parts dealers of 8,000 were offset by an 18,000 loss in clothing and clothing accessories,” according to the publication. Mining also saw a decrease of 7,000 jobs over the last 30 days.

Overall, the job numbers proved surprising as concerns had been growing that the labor market was starting to slow down. “It’s a significant surprise because economists were ready to go with the idea that payroll growth was slowing down because the job market had gotten tight,” said Stephen Stanley, chief economist at Amherst Pierpont, in an interview with Bloomberg. “The whole tenor has changed in terms of job growth. We’re back at steady-as-she-goes at a robust pace.”


How to Survive & Thrive During Difficult Times


How to Grow Your Search Firm without Losing Focus


Talent Access Strategies from Leading Search Firms Across the Globe