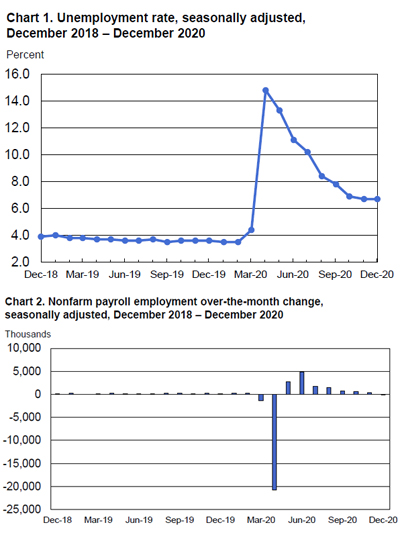 Total nonfarm payroll employment in December declined by 140,000 in December, well below the consensus forecast of a job gain of 45,000. Unemployment rate remained unchanged at 6.7 percent or 10.7 million unemployed persons.

The Bureau of Labor Statistics (BLS) noted in today’s release that both unemployment measures are much lower than their April highs, but still nearly twice their pre-pandemic levels in February (3.5 percent and 5.7 million, respectively). The decline in payroll employment, as reported by the BLS reflects the recent increase in coronavirus (COVID-19) cases and efforts to contain the pandemic. In December, job losses in leisure and hospitality and in private education were partially offset by gains in professional and business services, retail trade, and construction.

“Today’s BLS Employment Situation report reflects the short-term labor market impact of a resurgent virus and the residual political turmoil following the November elections. However, both drivers seem to be in many of our clients’ rear-view mirrors as they assess their need for transformative talent to drive expected growth in the new year,” said Bert Miller, president and CEO of MRI. “Talent consultants from our Network of over 300 executive recruitment offices continue to see solid demand for executive, technical, professional, and managerial roles particularly in building products and special trades; banking, insurance, and financial services; pharmaceutical; and automotive, chemical, and plastics manufacturing.”

The BLS reported that in December, 23.7 percent of employed persons teleworked because of the coronavirus pandemic, up from 21.8 percent in November. These data refer to employed persons who teleworked or worked at home for pay at some point in the last four weeks specifically due to the pandemic. This increasing trend to teleworking is confirmed by MRINetwork recruiters who report many client companies and talented professional workers expect to incorporate some work-from-home days as part of their standard work week schedule as the pandemic eases.

“In some ways, bad news is good news, because it increases the probability for more stimulus,” said Michael Arone, chief investment strategist for US SPDR Business in comments to CNBC. “Investors have convinced themselves this week that given what’s happened in Georgia, given the weakness in the economic data, that more help is on the way. We’re going to get more fiscal help, and it’s likely to happen pretty soon.”

Fox Business reporter Megan Henny noted the key driver of the December data: “The bulk of the losses were concentrated in the hospitality industry, as new restrictions intended to curb the spread of the virus forced bars, restaurants, and hotels to either dramatically scale-back service or close down altogether.”

Retail trade added 121,000 jobs in December, with nearly half of the growth occurring in the component of general merchandise stores that includes warehouse clubs and supercenters (+59,000). Job gains also occurred in non-store retailers (+14,000), automobile dealers (+13,000), health and personal care stores (+10,000), and food and beverage stores (+8,000).

Offsetting these job gains was employment in leisure and hospitality which declined by 498,000, with three-quarters of the decrease in food services and drinking places (-372,000).

Pooja Sriram, U.S. economist at Barclays, in comments to the Wall Street Journal, added, “It’s reasonably hopeful this will be a one-off rough patch and we’ll recover from there.”

“We are urging our clients around the world to remain focused on the underlying strength of an economy poised for a comeback as COVID-19 vaccines are widely distributed and consumer spending and capital investment grow,” said Bert Miller. “I have been in the talent access space for over 25 years and in numerous business cycles have witnessed the dangers of being circumstantially reactive. Prioritizing actions to address our immediate pain causes us to lose focus on our organizations’ greater missions. We urge clients and top talent to remain focused on their long-term objectives and avoid over-indexing on today’s immediate circumstances. It can be the difference between a company thriving and declining; an accelerating career track or a career stuck in the past.