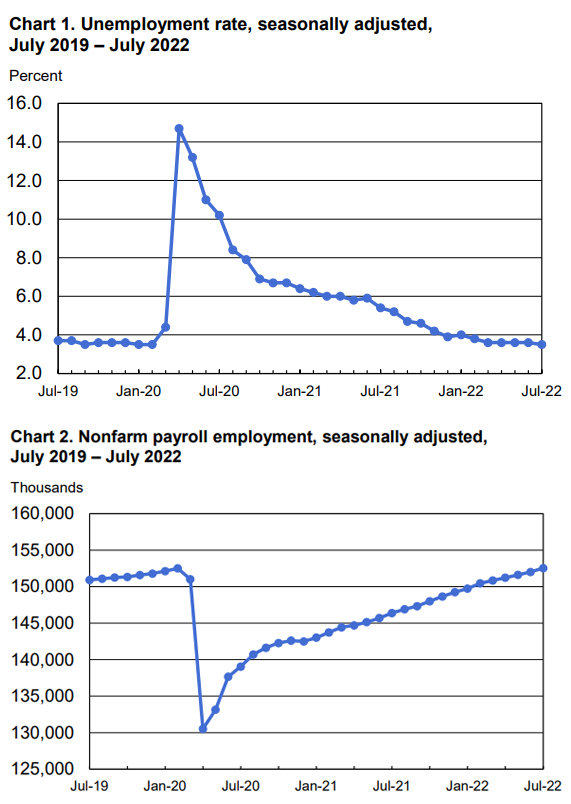 Offering some insight into the direction of the U.S. economy July’s employment report from The U.S. Bureau of Labor Statistics (BLS) indicated surprising strength in hiring demand. The BLS reported a gain of 528,000 non-farm jobs, well above analysts’ expectations and returning job levels to their pre-pandemic levels.

Employed persons who reported some teleworking during the month remained flat versus the June survey at 7.1 percent as employees continued the return to workplace trend.

“While Washington and the pundits can be expected to wrestle with the implications of today’s data and to apply the most advantageous spin to support their viewpoint, let’s step back for a broader perspective. Our organization, with over 1500 talent professionals in one of the world’s largest executive search firms, remain steady in our counsel to company leaders and to top executive, professional, managerial, and technical talent,” said Bert Miller, President and CEO of MRINetwork.

“Smart leaders and top talent need to look beyond a single report to the fundamentally changed employment landscape. The Covid era accelerated a redefinition of the employer-employee relationship that has been underway for years and is likely to be one of the lasting changes as we go forward in the world of work.

Top candidates (individuals) have become incredibly discerning as to how leaders handled the last two years and how well they are able to articulate the corporate mission throughout an organization that cascades to all. Transformative candidates have sharpened their ability to identify the best-fit organizations for their skills, attitudes, and lifestyles. And the best CEOs and their teams understand the need to change leadership styles and engagement with their organizations to remain relevant and effective.”

CNBC reporter Jeff Cox provided a top line analysis of the BLS report noting the “good news bad news” implications of the data, “Economists have figured job creation to begin to slow as the Federal Reserve raises interest rates to cool inflation running at its highest level in more than 40 years. The strong jobs number coupled with the higher-than-expected wage numbers led to a shift in expectations for September’s expected rate increase. Traders are now pricing in a higher likelihood of a 0.75 percentage point hike for the next meeting, which would be the third straight increase of that magnitude.”

Continuing the theme linking robust job gains to future Federal Reserve action to slow the economy to tame inflation, Bloomberg reporter Emily Graffeo noted, “The strong jobs report validates the Fed’s view of a resilient economy that can withstand additional interest-rate hikes. Traders must now recalibrate expectations for Fed policy, with a hike of three-quarters of a percentage point now the more likely scenario at the September meeting as the central bank battles inflation. A handful of Fed officials this week reiterated the central bank’s resolve to bring down high prices. Among them is Fed St. Louis President James Bullard, who has said he favors a strategy of front-loading big interest-rate hikes. That stance has likely strengthened after Friday’s job report, paving the path for an outsized hike and ruling out the possibility of a dovish pivot that Fed Chair Jerome Powell hinted at last week.”

Total nonfarm employment has increased by 22.0 million since reaching a low in April 2020 and has returned to its pre-pandemic level. Private-sector employment is 629,000 higher than in February 2020, although several industry sectors have yet to recover.

In July, employment rose by 528,000, larger than the average monthly gain over the prior 4 months (+388,000). Job growth was widespread in July, led by gains in leisure and hospitality, professional and business services, and healthcare.

Employment in construction increased by 32,000 in July, as specialty trade contractors added 22,000 jobs. Construction employment is 82,000 higher than in February 2020.

Manufacturing employment increased by 30,000 in July with most gains in durable goods industries which rose by 21,000 jobs.

Employment in retail trade increased by 22,000 in July, although it has shown no net change since March.

Employment showed little change over the month in wholesale trade and in other services.

“In 2022, we see CEO’s leaving their posts by record numbers across both public and private companies. Boards are looking to new leadership, skilled at dealing with the volatility in the world we live today — the pace of tech innovation, a pandemic, supply chain and inflation issues, unrest in Ukraine that impacts or could impact the entire world,” Miller added. “They understand the need to establish and maintain a true north star that is crystallized for today’s top talent — individuals who highly value social considerations from their organizations as well as a meaningful role to deliver results and earn a living. The relationship between the individual and the company has changed.”